Friends –
This just in: I got The Stranger’s endorsement!

The Stranger recognized the “brains and ‘consensus-building’ brawn” that has delivered landmark progressive policy and, like us, they want more of it. They endorsed because they see I am a proven progressive who is effective! 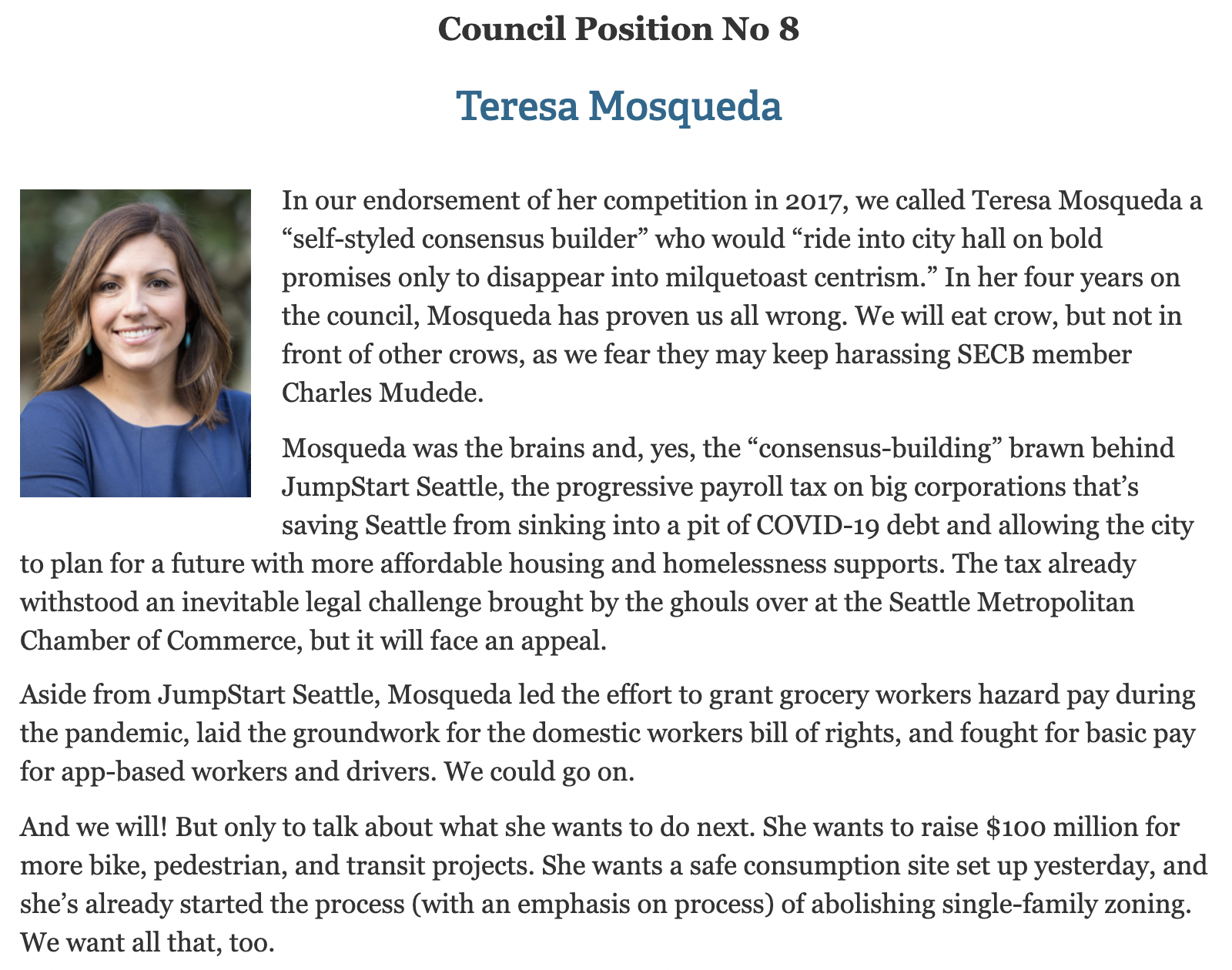 I am thrilled to have The Stranger’s support. And it was just icing on the cake that they recognized I proved they were wrong 4 years ago!

Four years ago, the Seattle Times Editorial Board didn’t endorse me then, worried that I am unapologetically committed to labor and community. Now, their complaint is that I am good at my job, came through on my promises, worked with both business and labor, and passed progressive policies and revenue. That’s just too effective and too progressive for their taste.

Together with Council and the community, and as The Stranger Election Control Board applauds, I led the passage of JumpStart Seattle Progressive Revenue, which prevented deep and devastating cuts in the very moment when we needed services most. According to the Times’ own Westneat, “when everyone was fiddling around waiting for somebody else to do some COVID-19 relief, Seattle acted.” I’ve led the passage of critical protections for critical app-based workers and essential grocery workers, invested more funding for affordable housing, prioritized small business resiliency, and invested in safer communities.

Instead of penning offensive tropes against me when I called for electeds to step up and show the leadership that this moment demands, perhaps they should instead focus their criticism on the gassing of children in our streets and babies in their cribs, and on the mismanagement of overtime pay and insubordination. Instead of fear mongering about me being a progressive, the Editorial Board (while patting themselves on the back for supporting the minimum wage/sick leave initiative I helped lead) should acknowledge that my bills that protect workers, invest in worker power, smallest businesses, and childcare providers, make Seattle’s local economy stronger. That’s what I’ve done, and will continue to do on Council.

The good news is we won four years ago, we proved The Seattle Times Editorial Board wrong and we passed proven progressive policies. That’s what earned us The Stranger’s endorsement today – thank you!  I am committed to continue working and delivering on these issues – with your support!

P.S. Voting starts this week, remember to get your ballots in by August 3rd and vote Team Teresa!

Thank you for using your power to fight for our THRIVE priorities! ... See MoreSee Less

Thank you for using your power to fight for our THRIVE priorities!

Whether you want some fun new workout clothes, leisure gear or new work attire - Labels Consignment Clothing is your place to go! Join us for this portion of our fundraiser to learn tips and tricks to consignment shopping 🛍 ... See MoreSee Less

Every outfit from my launch video was from ...

Come through this Saturday as a last hoorah before...

WOW! @mlklabor turning out the labor movement at ...

We have @orca4all in our corner and we’re ready ...